I’m enjoying the rash of independent newspapers springing up in free Benghazi. This item in the second edition of The Libya Post caught my eye: 10 top tips to spot if someone is a Gaddafi loyalist rat If you call Gaddafi a rat and he gets upset – he’s definitely a rat When things are looking … END_OF_DOCUMENT_TOKEN_TO_BE_REPLACED

Review by Bina Shah Beautiful From This Angle, the debut novel by Maha Khan Phillips, is not what it seems to be. The author chooses the well-known chick-lit technique of bringing together three women friends to undergo a transformational experience, yet this book is not “chick-lit” in the strictest sense. The social scene of Karachi’s … END_OF_DOCUMENT_TOKEN_TO_BE_REPLACED

Here’s some stuff I’ve been reading on Libya since getting back, mostly on the debate over intervention… Is Barack Obama Secretly Swiss? The administration’s pathetic, dithering response to the Arab uprisings has been both cynical and naive, according to Christopher Hitchens Libyan Rebels Just Learning How to Use Their Guns – a portrait of a … END_OF_DOCUMENT_TOKEN_TO_BE_REPLACED 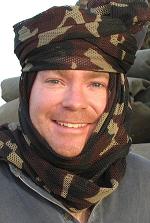